The History of the Gislingham Silver Band

The Gislingham Silver Band was originally formed in 1885 as the Gislingham Brass Band, with the first newspaper article about the band appearing in the Diss Express on Friday 29th May of that year. It reported "On Tuesday the children belonging to the Sabbath School, headed by the newly-formed brass band, paraded the principal streets, and then adjourned to a meadow, kindly lent by Mr. T. Edwards, where various games were indulged in till tea time, when they were again re-formed with the Band and marched to the chapel".

A couple of years later, the band was in the papers again when it played for Queen Victoria's Golden Jubilee celebrations, where it "discoursed sweet music during the dinner and at the sports": 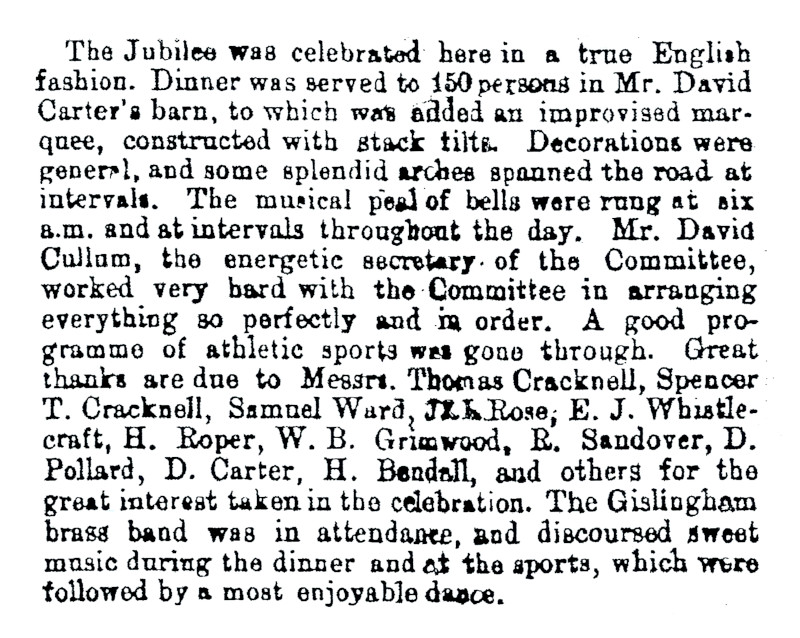 The first Bandmaster was Harry Southgate, who was followed by Mr David Ellinor, grandson of band member Percy Ellinor. David was to be the Bandmaster of Gislingham Band for well over 50 years.

This enthusiastic band came back from the brink of extinction around 1920. It was revitalised by three stalwarts: Harry Southgate, Percy Ellinor and Ted Steggall. In 1929 Reg Pollintine and Cecil Carter joined the band. Reg remained a band member until his death in 1993 aged 82 years. Cecil beat his old friend by outliving him. He died in 2003 aged 90 years having played for 74 years in the band, and was buried in his uniform. 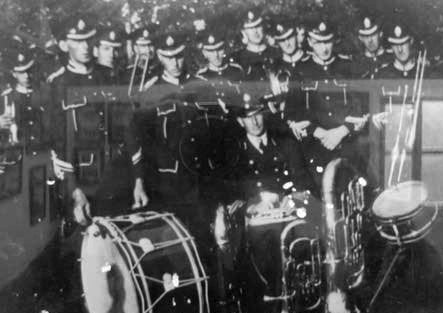 One of the the band's earliest photographs, taken at Martlesham in 1926

In 1932 the band received a side drum and a bass drum by way of donation, and subsequently became "The Gislingham British Legion Band", playing for rallies and parades - a tradition that continues to this day.

In the late 1960's it assumed its present title of the "Gislingham Silver Band".

The band plays at the British Legion parade in Stradbroke, Suffolk, in 1966

The band used to practice every Monday night in the old Free School in Mill Street, a thatched building that had become redundant after the building of the new school in 1870. It was not in the best state of repair and was very cold in winter, with the first player to arrive at band practice having the job of lighting the fire. The Free School building was put up for sale in 1959 and the band was given notice to quit. Cecil Carter spoke to local shopkeeper, Tom Fisher, who owned the old redundant Baptist Mission Hut on Mill Street. This had started lfe as a First World War army hut that had been purchased and transferred to Mill Street in 1919, having been used for many years as a Baptist Chapel. Tom Fisher kindly agreed to let the band use the hut as their headquarters rent free. The hut had no electricity so it was lit by paraffin lamps until as late as 1969. 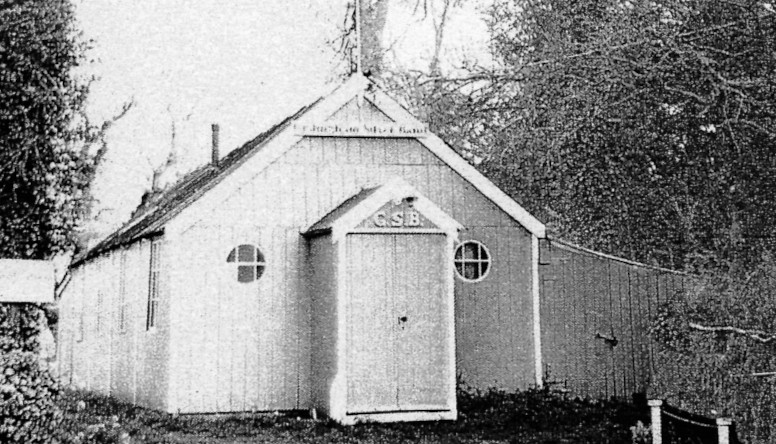 Tom Fisher died in 1976 and his wife died two years later. In 1982 Eric Fisher, the executor, sold the Mission Hut to the Trustees of the Gislingham Silver Band for £1. The conveyance relating to the drive and car parking area to the rear of the hut was completed in 1989 for an additional £1.

Ron Wright joined the band in 1983 as musical director. Ron had played as a lad in the Markham Main Colliery Band, near Doncaster, and had joined the senior band at the age of 12. At the age of 26, after doing his National Service in the Army, he went to Bretton Hall College in the West Riding of Yorkshire where he specialised in music. After that, he took up a teaching post in 1970 at Eye Secondary Modern School in Suffolk as Head of the Music Department. Here he encouraged many pupils to take up an instrument and join the School Band. Later many of these pupils were to become Gislingham Silver Band members.

Ron retired as Gislingham Silver Band's musical director in September 2010 after 27 years of faithful service, but took up the baton again in January 2012 when the musical director resigned.

At the Annual General Meeting in January 2014, Adrian Waite was appointed musical director at Ron's request, so the latter could do a bit more playing.